Factories with metalcutting machines invariably use vibratory finishing equipment to remove burrs and sharp edges from components. If parts have been laser-cut from sheet metal, however, deburring and surface enhancement are sometimes secondary. The main purpose of the rumbling action can be to stress-relieve case hardening in the heat-affected zone (HAZ) around the component edges. 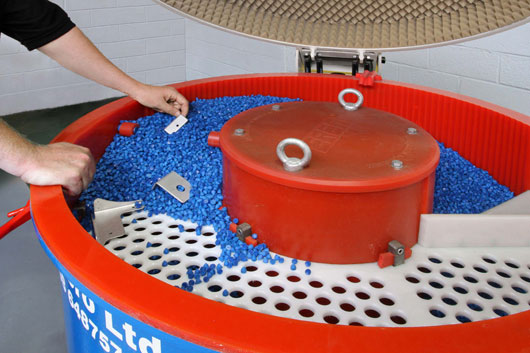 One sheet metal subcontractor that exploits this technique is Rotherham-based ESP Laser Cutting, which part-exchanged its decade-old PDJ Vibro vibratory bowl in January 2016 with a new model from the same supplier.

The HAZ on sheet metal edges caused by a high temperature laser beam is problematic for several reasons, especially on components over 10 mm thick, although all material gauges are affected. First, it can complicate fabrication by distorting the weld. Second, it prematurely wears milling cutters and drills if the parts are being machined around the outside. Additionally, paint and other coatings such as zinc tend to flake away, necessitating costly rework.

All of these problems are resolved if parts are processed in a vibratory bowl. The maximum size of laser-cut component that can be accommodated in the PDJ Vibro EVP-RA 315 circular, 385-litre bowl at ESP is 400 mm x 400 mm. Above that, if parts need to have their edges stress-relieved, they are shot blasted.

An alternative is to laser cut sheet with nitrogen as the assist gas, rather than oxygen, which is effective at reducing the HAZ on stainless steel and to a lesser extent on mild steel up to 6 mm thick. The only sheet material that is not unduly affected by case-hardening during laser profiling is aluminium, but even these components do not escape the vibratory bowl as flashes often form that need to be removed. Similar occurs in other materials if the laser cutting machine’s settings drift and the operator does not notice.

ESP’s sales director Stephen McMillan is one of the most experienced laser cutting specialists in the UK, having used a 1 kW Ferranti slow-flow laser for production applications more than 28 years ago. He now uses the most modern plant on the market, a 6 kW CO2 laser profiler purchased in May 2014 and a fibre laser of similar power installed one year later, both 3 metre x 1.5 metre capacity machines from Bystronic.

The latter machine was the first in the country to be fitted with PowerCut technology, which increases by about 50 per cent the thickness of plate that can be cut (for example, 30 mm aluminium rather than 20 mm). It also raises the profiling speed for these thicker materials to compete with CO2 lasers.

Mr McMillan said, “Soon after I set up ESP in 1994, customers started asking for their parts to be stress-relieved by rumbling.

“We decided to subcontract the work and identified PDJ Vibro’s service at its Bletchley technical centre to be the best on offer.

“As the volume of work increased, we found ourselves spending £2,000 per month on the service, so it made sense to buy a vibratory bowl from them and bring the facility in-house, which is what we did.”

He added that the vibratory finishing machine worked well until its replacement earlier this year, as has a similar size of PDJ Vibro maize dryer still in use to prevent oxidation of components after they come out of the water-dosed ceramic media in the other vibratory bowl.