Braintree subcontractor, J Reeves Engineering, which specialises in machining and fabricating components and assembles from sheet metal and tube, took delivery of a vibratory trough deburring machine from PDJ Vibro. It joins a twin vibratory bowl finishing and drying system from the same supplier that has given reliable service for more than 20 years. 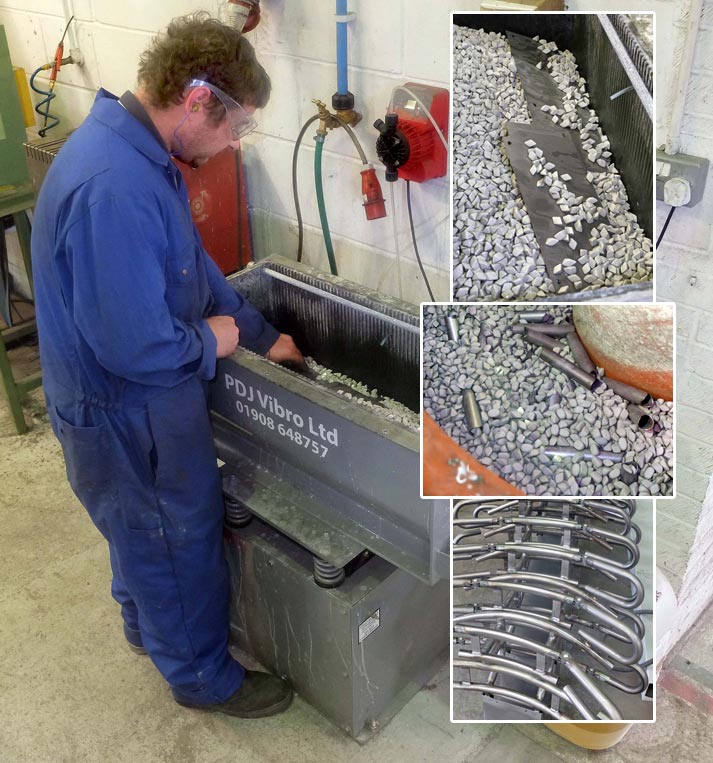 The bowl is ideal for deburring and edge breaking of sawn and machined tube and bar. It accommodates batches of components weighing around half a tonne and finishes them automatically to a consistent standard. The variability of manual finishing is eliminated and so also is the labour cost associated with dedicating someone to the job.

However, what the bowl does not handle well are some sheet metal parts. If they are tool long, they cannot follow the toroidal path of the abrasive media. Parts that are too small, on the other hand, tend to stick in the sides of the mechanism that automatically separates components after processing. The hinged arrangement, which directs finished components over a separator screen when a flap is lowered into the counter-rotating media, necessarily has areas in which thin sheet can become wedged.

In this case, the solution suggested by PDJ Vibro was a Model 300DB trough in which the vibrations cause the ceramic abrasive media to tumble linearly across the width of the machine, rather than take a toroidal route. It means that batches of sheet metal components measuring up to the internal length of the trough (787 mm) can now be finished automatically. As with tube and bar parts, the benefits are consistency of finish and elimination of labour cost.

Heavy gauge steel coated with rust-inhibiting enamel and a hard-wearing polyurethane lining indicate that the 300-litre capacity trough will last as long as the vibratory bowl at Braintree. A fluid pumping system including container, hoses and fittings has been supplied for recirculating a surface finishing compound.

Jerry Reeves, who started the privately owned, family business in 1976 commented, “We have been impressed with the performance and longevity of the PDJ Vibro finishing bowl and dryer, bearing in mind that this type of machine due to its very design can literally shake itself to destruction.

“Earlier this year, we started receiving orders for more repetition parts in sheet metal. The ability to do away with the cost of hand finishing justified our purchase of the trough, which conveniently requires only a single-phase electricity supply.

“When I telephoned the company, which is also family owned and run, I received the same prompt, straightforward service from the second-generation directors as I did from PDJ Vibro’s founder, John Hurley, back in the mid-90s. So I decided to go with the same supplier.”

There was another aspect of the PDJ Vibro approach that Mr Reeves appreciated. Bearing in mind that such finishing machines are relatively low cost items, it did not make sense for him to drive for nearly two hours to the supplier’s Bletchley showroom to see the trough demonstrated. So he bought it unseen on a sale or return basis.

A majority of J Reeves Engineering’s work comes from firms within a 30-mile radius of Braintree, although the furthest customer is 160 miles away in Wimborne. A hallmark of the business and a prime reason for its success is the quality of the assemblies supplied. Every order is a priority and, as Mr Reeves puts it, “there is no room to have a bad day”.

Wiedemann turret punch presses and Trumpf laser cutting machines are used on sheet metal gauges up to 15 mm, while thicker plate is profiled on a Flow water jet cutting machine.

Materials processed by the subcontractor include steels and non-ferrous metals including stainless steel and aluminium. All are suitable for processing in the PDJ Vibro equipment prior to fabrication, either by hand or in two Fanuc robotic welding cells. Stove enamelling and powder coating are also carried out on site. 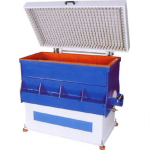 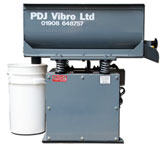