Vibratory finishing bowl from PDJ Vibro pays for itself in six months. 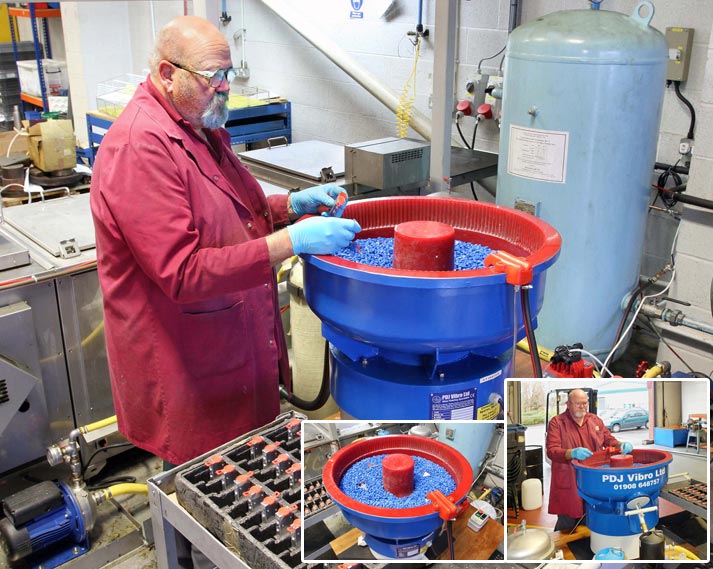 Winning a contract to machine large batches of two aileron parts from solid aluminium for the Airbus A320 presented Gloucestershire subcontractor, Norman Precision, with the problem of how to finish the complex components economically, as they require a large amount of hand deburring. The solution was the purchase of a PDJ Vibro 60-litre, bench-top vibratory finishing bowl, which has automated part of the finishing process.

Machining of the aileron components is completed in one hit on a Mazak Integrex 5-axis turn-mill centre. One-third of the cycle time is consumed by in-cycle deburring of specific features on the outside with a milling cutter. Unfortunately, the flashing in the interior of the component still has to be removed by hand, as access for the mill is restricted. However, much of the previous manual deburring of the outside after machining has been replaced by processing in the vibratory finishing bowl, saving 20 minutes of external hand finishing per component.

A range of other parts produced at the subcontractor’s Stonehouse factory is now similarly deburred automatically. One is a stainless steel component that was previously put out for bead-blasting. It is an ongoing job for a customer and the monthly saving on subcontract finishing is substantial.

An additional benefit is that the component is produced entirely in-house, so the lead-time has been reduced by about a week, speeding delivery to the customer. Moreover, as the entire production process has been brought in-house, control over the contract is total.

Kevin Norman, managing director of Norman Precision said, “Based on savings in the production of these two components alone, ie the aluminium aileron part and the stainless steel component, the capital cost of the PDJ Vibro vibratory bowl will be recouped in less than six months from the date of purchase in August 2015.”

Another job on which savings are being made is a pneumatic manifold for an aircraft, produced from solid aluminium in two operations on a turn-milling machine. Internal holes intersect at compound angles, creating some heavy burrs that still need to be removed manually afterwards. The previous 15 minutes of hand deburring of the exterior, however, has been replaced entirely by vibratory finishing of the components six at a time in a 45 minute cycle.

Bob Savory, Norman Precision’s operations manager commented, “It means that our finishing specialist can concentrate on the exacting job of removing the internal burrs and complete the work while the next part is being machined on the turn-mill centre.

“Another advantage is that the patina on the outside of components that have undergone vibratory finishing is better, providing a more consistent, mark-free surface that improves the quality of subsequent nickel plating.

“Consistency of finish is also better, as the variability that inevitably results from human intervention has been removed.

“In extreme cases, if an error is made during manual finishing that causes a part to be scrapped, it can take the profit out of the job. Vibratory finishing greatly reduces this possibility.”

PDJ Vibro has recommended different sizes, geometries and grades of ceramic abrasive to optimise processing of different materials and to discourage ingress of media inside the components. To this end, the larger ports in components machined by Norman Precision are blanked off using plastic plugs. An adjustable dosing pump has been supplied that injects metal finishing compound into the bowl periodically, typically every 10 seconds, while a constant, minimal flow of cold water is maintained to lubricate the media and keep it and the components clean.

Processed parts are washed immediately afterwards in an adjacent, aqueous cleaning line to discourage staining, which would otherwise show through the nickel plating or anodised finish that are often subsequently applied.

The finishing and cleaning area of the factory is now the hub of the subcontractor’s activities, positioned between the machine shop and dispatch. The PDJ Vibro bowl additionally plays a useful role in continuous improvement at the Stonehouse factory by freeing staff to become more involved in quality planning, process control and customer liaison.

PDJ Vibro is providing ongoing support by advising on the optimum methods for finishing new materials, such as thermoplastics, that the subcontractor has been asked to machine. For example, trials are currently in progress at the supplier’s technical centre in Bletchley to establish the best way to process PEEK in a vibratory bowl.