The small town of Axminster in Devon, perhaps best known as a major carpet manufacturing centre, is also the location of Axminster Tool Centre Ltd – the UK's largest supplier of tools and associated equipment and consumables for the woodworker, carpenter and craftsman, many trade professionals and, increasingly, the metalworking specialist.

This highly focused business has grown over the last two decades from a high street shop, established in 1972, to a still-expanding multi-million pound turnover, international operation, employing over 230 people and supplying more than 18,500 products. These are marketed via a well-known annual catalogue, internet and telephone sales, and through distributors, not only in the UK and Ireland, but also across the Continent and in a growing number of other countries – including the latest addition, Canada.

Most of Axminster Tool Centre's vast range of products is sourced from manufacturers around the world. However in 1996, the company decided to create an in-house manufacturing facility, to enable them to design and produce innovative products for the woodturning part of the business. This enabled them to have more control over price and quality, and react to consumer demand quickly and efficiently. Lead time between initial design, to prototype was cut from months to just a few days. 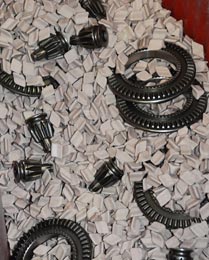 Using a sophisticated CAD design system, state-of-the-art Mazak CNC machine tools and the latest laser marking equipment, this facility now manufactures parts and products – woodworking chucks, in particular – to the highest standards. As a result, Axminster is able to make chucks of superior quality, compared with the previous imported items, and can sell these at a lower cost – considerably benefiting its customers. The manufacturing operation, which started with just two people, now has a staff of 12 and produces a wide range of different components.

Optimum quality of surface finish has always been a prime consideration in the production process at ATC, both from the functional and aesthetic points of view. Until recently, the company employed bead blasting for the deburring and edge rounding of small parts – particularly precision pinions and their associated gear scrolls used in its latest generation of woodworking lathe chucks – but found this an unsatisfactory, laborious and time-consuming process that created an unattractive matt finish, so ATC decided to investigate alternatives.

Following processing trials at PDJ Vibro Ltd in Milton Keynes, the company opted to install a PDJ Vibro 'EVP-RA 100' vibratory finishing machine, which has now been in operation since April this year. Comments Mark Vincent, who is responsible for innovation & development: "Even though it's relatively early days with the new PDJ machine, it has already proved its worth. With vibratory finishing, unlike bead blasting, no operator is involved once the machine has been loaded and switched on so the operator can undertake other tasks. We are also achieving a smoother and shinier surface result than before, free of burrs and sharp edges. There's no doubt that the PDJ machine has enhanced the finish of these particular parts and is making a significant contribution to overall product quality as well as saving time."